Okay, okay, I know it’s been a while since I did a MFDCS post. I’ve had pseudo-posts, like about that time when The Boyfriend was in The Music Man or when The Roommate went to a Masquerade, but I used to write about my friends’ jobs and hobbies in depth, and because I have phenomenally awesome friends, I decided it was just about the right time to bring this series back.

Katherine is an entomologist. She studies bugs. She is a bug scientist. That picture up there is of her collecting samples, which quite frankly takes an amount of courage that I doubt many of us possess.

The actual definition of entomologist is here: “a scientist who studies insects. Entomologists have many important jobs, such as the study of the classification, life cycle, distribution, physiology, behavior, ecology and population dynamics of insects.”

So, um…WHAT??? How freaking cool is that?

(Also, she’d probably like me to remind you that “bug” isn’t a terribly specific term. She works with parasitic wasps, which are actually called microhyms in scientific circles, and which definitely don’t make me want to scrub all my skin off in a panic.)

She is currently working on her PhD after graduating from an Ivy League college, so if you thought you were talking to the smart one in my group of friends then I regret to inform you that you are sadly mistaken. Katherine can look at a wasp underneath a microscope and determine which of the hundreds of categories available it falls into. Then, she is responsible for categorizing them like this:

And blowing them up into ridiculously detailed posters like this: 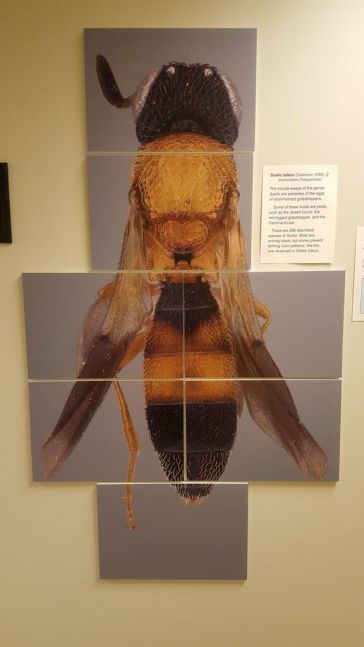 Really though, she’s one of less than ten people in the world – that’s the ENTIRE WORLD – who study the taxonomy and systematics of these wasps. She even presents at conferences, such as the meeting of the Entomological Society of America.

And the best thing ever? Katherine is as big of a nail art junkie as I am. This is the answer to your question if you wondered how on earth we’re friends when I write a blog about my fingernails and she works for the freaking Smithsonian in her spare time. Her recent hymenoptera-inspired manicure looked like this:

And she would like to comment that “the little grey dots on the green are parasitized stink bug eggs on a leaf.”

…I’ll just leave it at that.

One thought on “My Friends Do Cool Stuff: Volume V”