It’s been a rough week.

I’m sure I’ll talk about why it’s been a rough week later (Eek, major changes in the life of a twentysomething? Call the authorities!), but if there’s anything I like to do when life’s been a little crazy, it’s slow down, take a few deep breaths, maybe do a little meditation or go for a nice long run, AND THEN PAINT MY NAILS THE CRAZIEST COLORS I CAN POSSIBLY FIND.

I feel a little bit like screaming right now, but since my apartment has very thin walls and the neighbors probably wouldn’t appreciate the high-pitched shriek of a Soprano I (who totally nailed the high B at her last Christmas concert, but I digress), I’m going to let my nails do the screaming for me. Usually, to me, this means neon, but I’m feeling contradictory. There’s only one possible solution: GLITTER.

I couldn’t choose between my two favorite solid glitter polishes for this week, and because I get reckless when I’m upset, I decided that I didn’t have to pick one or the other. That means that I’ve done one hand in glitter teal and the other hand in glitter purple. Any resemblance to the Joker is intentional (and if you’re as into comics as I am, let’s talk about the Joker in comments! What do you think of Jared Leto??). 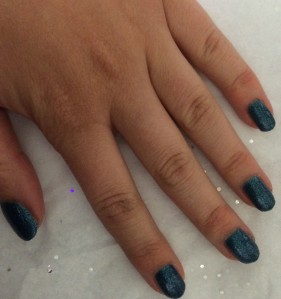 I didn’t intend to use yet another Julep for the blue-green hand. The blue-green I wanted is a Butter London in Henly Regatta that I picked up for $7 at a South Moon Under last summer when I was a little tipsy after a dinner with my friend. Thankfully, the nail polish was the only impulse buy she let me get while we were there – SMU is expensive! Unfortunately, it didn’t last long. I remember the first couple of coats going on so perfectly last summer, although it took three or four to get the full opaque effect, but this application was just awful. The polish was barely a liquid and wouldn’t go on smoothly no matter what I did. I had to switch to a similar Julep I had, Julep Jennine, which did the job nicely in only two coats.

The purple, China Glaze’s Tail Me Something is, strangely enough, a gift from Rachel in Minneapolis. I have never met Rachel, but she was my Santa in the Redditgifts Makeup and Nail Polish Exchange last year (which was a blast, and which I highly recommend if you’re a Redditor), and sent me so many cool polishes and tools that I’m still thanking her about a year later despite not knowing her last name.

The Roommate and I also had a blast shooting these photos of my nails – I usually take the pictures myself, but in this case I wanted to show off the crazy, glittery mess of a contrast. At one point, she was holding a standing lamp in one hand and the camera in the other. I finally laughed a little after my rough week (this time the Joker reference wasn’t intentional at all) and we were able to get some cool shots: 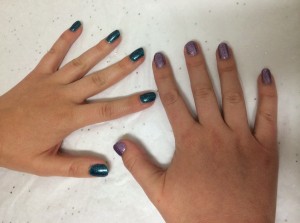 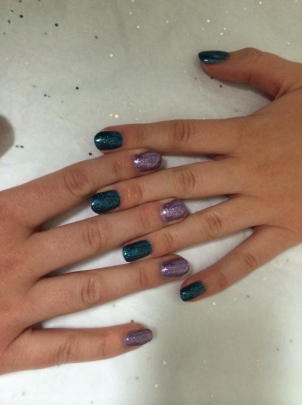 Well, anyway, I’m off to a crazy weekend – it’s Mother’s Day Weekend, so I’m taking my mom out for some nice things and hoping she doesn’t comment on my mismatched hands. In my opinion, it’s the best form of therapy.

Wishing you a great weekend,